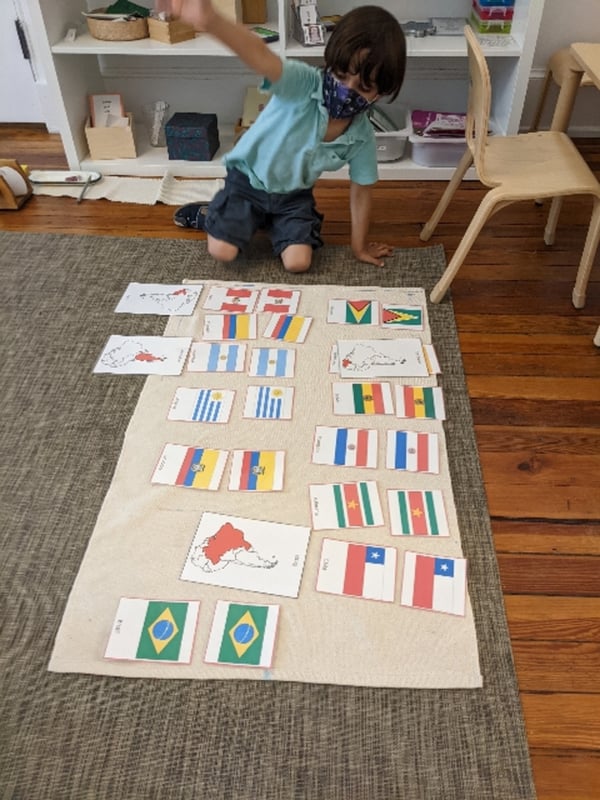 Around the fourth of July, learners really enjoy making flag crafts during morning outdoor time. They learn that each part of the flag has a different name such as field, canton, flagstaff, or hoist. While the learners may only remember a few of these terms, the goal is not retention. Rather this practice helps learners appreciate the specificity and diversity of language. Learners experience hearing and making different sounds as well as internalizing how language can classify the world in a seemingly infinite number of ways. 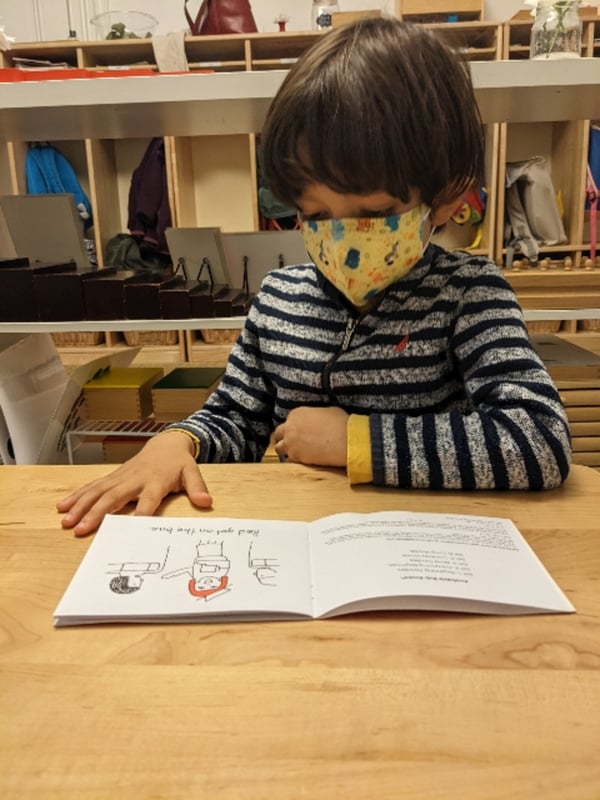 Each month learners regularly discover new books in the studio library. For example, in the spring, books about insects and spring complement the work they find around the studio. Learners will also find books exploring the culture and geography of whichever continent they're currently studying. All learners have access to a library in our studio on the first floor. Learners who nap after lunch in the garden level also have their own rotating selection of books to peruse before drifting off to sleep! 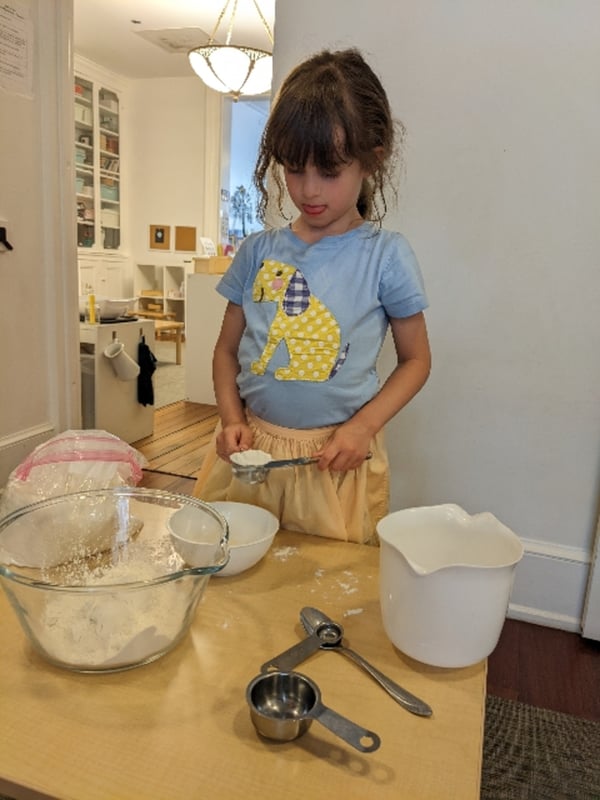 Learners do so much work throughout the day. It is important they have adequate rest and nutrition. Part of this involves making and enjoying snacks in the morning and afternoon! 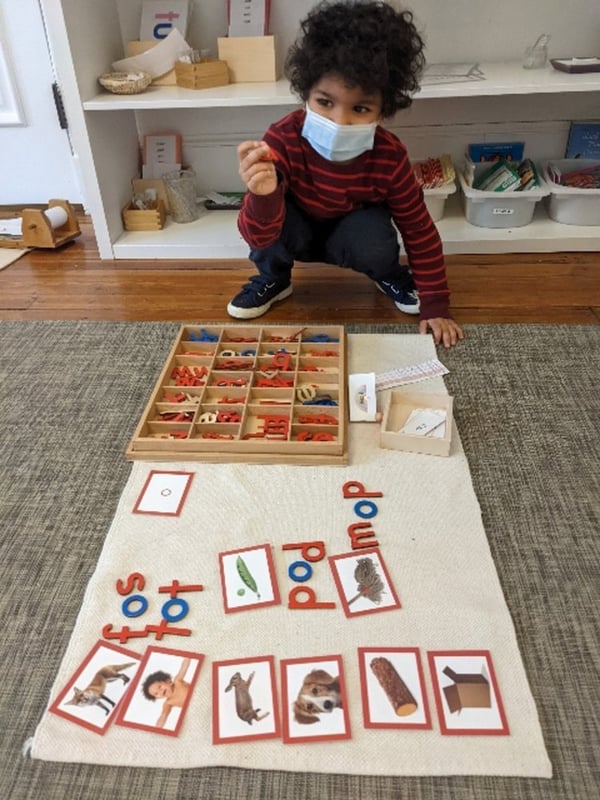 The moveable alphabet is a set of small wooden letters that learners can use to form words. It is a quintessential Montessori material. It allows learners to begin writing after they have developed familiarity with all the sounds of the alphabet and before they have mastered writing with a pencil.

Learners' first foray into phonics begins with the sandpaper letters. They learn consonants via their pronunciation instead of the letter name. For instance, “t” is only ever referred to as “ttt” in the studio and never “tee.” Thus learners become familiar with actual letter sounds as opposed to letter names, which rarely correspond to their actual pronunciation. This also applies for vowels. However, in the beginning stages we only learn the “short” vowel sounds like the “a” in “bat” or “i’ in “bin.” Once learners have mastered one sound per letter they are ready to move on to using the moveable alphabet. It is by using the moveable alphabet that learners will be introduced to long vowel sounds and the various blends and combinations of sounds in phonics.

Learners primarily use the moveable alphabet with the language drawers. Learners first begin with the red drawers. In the first red drawer, learners find a handful of pictures. They use the moveable alphabet to label each picture. In this early stage, words will be very short such as “cat” or “hat.” These words are ideal since their spelling is highly phonetic and more consistent with learners’ basic letter knowledge. Guides will then give the learners “control cards” with each spelling and invite the learners to compare these with their own writing. In this way, learners learn to self-correct as well as practice their reading skills.

In order to further expand on their nascent reading skills the drawer contains a small booklet of words incorporating the same sounds they practiced in their label making. After they read this small book to a guide, learners mark they have completed the drawer and have qualified to advance to the next one! Learners will continue advancing through each red drawer until they reach the seventh drawer. Learners will then work through the orange drawers and additional color drawers in the same fashion until they complete the entire set!

Learners also use the moveable alphabet in other contexts. For example, learners enjoy using the moveable alphabet during map-making work. After learners draw and paint each map, they query the guide for continent or country names. Learners then use their internal bank of sounds to write. While their spellings may not replicate standard spelling at this point, this is not the goal. The aim of this work is to develop learners’ confidence in writing and listening. For example, learners might hear “Canada” and spell it as “Canidu.” Phonetically speaking, this is right on target and we do not correct it at this time.

Ultimately, the moveable alphabet is beloved by learners not only because it offers great sensory feedback, but because it also allows them to explore writing without the added challenge of penmanship. Handwriting is its own challenge and learners work on this separately so as to create more opportunities for success!

Common Phrases in the Montessori Studio

There are certain key phases that Montessori guides use regularly to support learners throughout their day. These common sayings encourage independence and a shared sense of culture. To have consistency at home and in the studio, we welcome parents to try using some of these phrases. Let’s review a few: