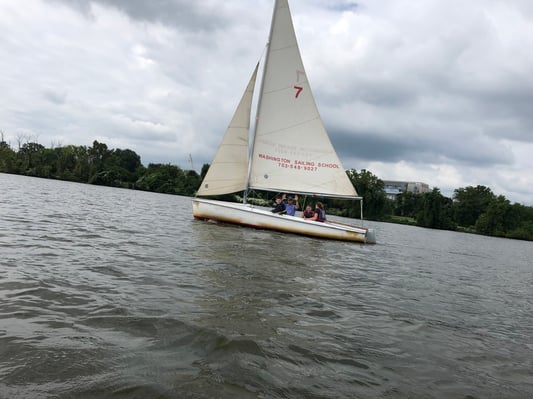 In session one, learners will be participating in a series of weekly sailing lessons on the Potomac. Just before departing for their first lesson, Acton Middle School learners participated in a discussion exploring “rites of passage.” They were introduced to the Australian Aboriginal custom known as the “walkabout,” in which tribe members between the ages of 10 and 16 leave their community to journey out into the wilderness on their own for up to six months. This rite of passage is meant to allow young tribe members to build self-confidence and engage in self-exploration. Upon their return, Aborigines would be welcomed back into the community as adults who could take on more responsibility and serve their community in more significant ways.

While not a walkabout, the middle school adventure program is meant to challenge learners while building their self-confidence and encouraging them to engage in self-exploration.

Looking at the opportunities that lie ahead in Acton’s Adventure Program, learners chose which objective was most important to each of them individually:

All the middle school learners were most excited about mastering a new skill (for example, how to sail). Energized and ready for the challenge, learners left for the marina in the Adventure Van. After a discussion about safety, they were introduced to the Flying Scot sailboat, and they learned some basic sailing vocabulary, how to rig the sails, and how to tie a few basic knots.

They then split up between two boats and were off sailing on the Potomac River. All of the learners took turns practicing different sailing tasks including steering, watching the wind, and controlling the main and jib sheets. They also learned about sailing procedures including the right-of-way rules (when encountering another boat) and docking.

After almost two hours on the water, the learners returned to shore for lunch by the river. After lunch, they practiced tying knots and unrigging the sails and played a game testing their sailing vocabulary knowledge. They also got to see some of the different sailboats used by the Georgetown University and The George Washington University sailing teams.

After an exhilarating day at the marina, learners were buzzing with enthusiasm on the way back to Acton. With the stage now set for future sailing sessions, it will be exciting to see Acton Middle School learners grow in their new knowledge and skills!