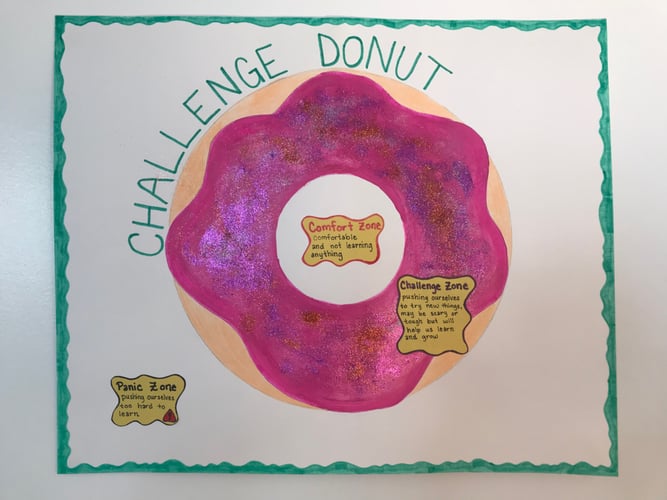 At the beginning of each year, elementary studio learners are introduced to the Challenge Donut. The Challenge Donut is a visual metaphor that helps learners identify when a task is challenging but not overwhelming.

The hole in the middle of the donut is the learner’s comfort zone. The comfort zone is a goal so easy it’s uninspiring and even boring. The space around the donut is the panic zone. The panic zone is a goal so far beyond current abilities that a feeling of overwhelm prevents growth. The donut itself, covered in sprinkles and frosting, is the challenge zone. This is where the learner is most likely to learn and experience “flow.” The Challenge Donut gives learners words to describe their experience when taking on different challenges and help them avoid boredom or feeling overwhelmed.

During this year's Challenge Donut discussion, the guides asked learners, “When you did the Studio Scavenger Hunt with your team members on the first day of school, were you in your panic, challenge, or comfort zone?” One learner said, “I was in my comfort zone because scavenger hunts are fun, and I know how to do them.” Other learners said that the Studio Scavenger Hunt was in their challenge zone because the hidden dragon crest pieces were difficult to find. One learner offered another example of something in his challenge zone saying, “Creating this year’s music video is in my challenge zone because it’s difficult to lead.”